As you would have learnt from the previous newsletter, I have multiple sclerosis – MS. This is an autoimmune condition where your own white blood cells (part of your immune system) eat away at the protective covering of your nerve fibres. This damage of nerve fibres results in the development of lesions, which cause normal nerve function to change. In my case, this means body fatigue, altered balance, gait and left-leg ambulation – amongst other symptoms.

My MS has been reasonably active since July 2017, with two relapses between then and December 2017. In late 2017, my neurologist decided I was a great candidate for a drug treatment called Lemtrada (alemtuzumab), only approved for use in MS patients in mid-2015. Lemtrada’s active ingredient searches for a group of white blood cells called B cells, and then destroys them. There is still no definitive MS cause, but current research and knowledge suggests very strongly that B cells (triggered by an external viral infection) are the cells that eat away at the protective covering of nerve fibres, causing lesions.

Lemtrada destroys these cells, and, over a period of 3-6 months, a patient’s immune system will be busy creating brand new B cells – B cells which won’t go around the nervous system, nibbling away at nerve fibres and causing lesions. This manufacture of the B cells occurs in bone marrow, governed by the patient’s stem cells. You may have heard of ‘stem cell treatment’ in the news lately – a ‘magic bullet’ treatment which can halt many autoimmune conditions, and blood cancers. You could think of Lemtrada as a pharmacological version of stem cell therapy, if you like. Lemtrada is also the first drug for MS which has shown some anecdotal evidence of repairing existing damage – it’s not a cure at all, but it’s a really powerful medical drug.

Lemtrada costs just over $90,0001 for the full course of treatment (a five-day initial treatment and a three-day top-up a year later), but, as we are lucky enough to live in Australia, this cost is covered by the Pharmaceutical Benefits Scheme (PBS). Given the oral medication I was previously on (a tablet called Tecfidera, also on the PBS) cost nearly $1,000 a month, and I had already been on it for three years, I had already had $35,000 worth of medications, with further progression of my condition. The extra cost would be offset by the fact that there is no further requirement for me to have medication – ever again – as long as Lemtrada is successful for me.

After detailed consultation with my neurologist, MS nurse and family, we decided that going ahead with Lemtrada treatment was a sensible option. So, in March 2018, that’s what we did. 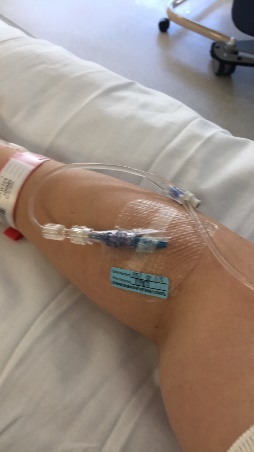 A Lemtrada journey begins a month before treatment. I came off my existing MS medication, and stopped eating any foods which could potentially cause an infection from a bug called Listeria. Foods such as smallgoods, deli meats, soft cheeses, sushi, cantaloupe – essentially I was eating like a pregnant lady. I shall continue to be wary of these foods until the end of 2019. I also received a course of antibiotics to also reduce any Listeria infection.

Lemtrada is a drug given as an intravenous (IV) infusion – my infusions took place at the Ambulatory Care Centre at the Austin Hospital in NE Melbourne – my, what a dedicated and fabulous team of nurses and doctors there! On the way to the hospital for Day 1, I happened to ring up in response to a radio comment, and I won a $50 petrol card – what a win! I thought this was a good omen for the rest of the week…

I arrived at the hospital, completed some final administration forms and had my initial observations taken; I was then led to my chair for the week. The chairs are electric recliners with the capacity to lie almost horizontally for sleep. After a few attempts, I had my cannula inserted, and was ready to go. I had the cannula in for three days, then a new one inserted for the last two days of treatment. This meant I was showering, sleeping, eating, parenting etc all while temporarily cannulated. The first part of treatment is to have steroids administered – steroids help the immune system better tolerate the drug, and they can calm down any existing symptoms. 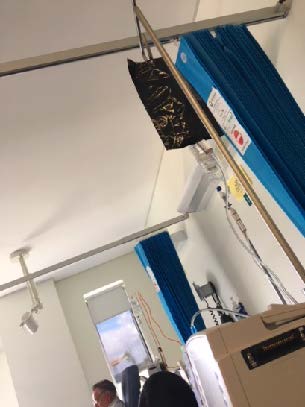 This picture here shows the Lemtrada drug ready to go, covered in a black bag to reduce exposure to light, which can disintegrate the drug. It was a 100 mL bag, designed to be infused over 4 hours, with 2 hours of post-infusion observations. I’d use some of the time in the post-infusion observation block to do some roll-ups against a wall – the chairs were comfortable enough, but after sitting in them for five or six hours, your body locked up a bit. I found doing roll-ups released muscles in my body quite a bit – go Pilates! This meant the days were long! I would arrive at the Austin at about 8:30 am each day, and leave at about 4:00 pm. Pretty much a full-time job!

Day 1 was a little longer than usual, as I became tachycardic (a high heart rate) right at the end of my 2-hour observation period. This is common throughout a Lemtrada course. My heart rate rose from approximately 80 to 120 bpm (beats per minute) – a significant increase. My heart rate had dropped to 100 bpm by the time a neurologist arrived to check things out. She was happy to discharge me, and I’m pleased to say I got to spend the night at home with my husband and four-year-old daughter, instead of in a busy hospital ward.

The rest of the days were smooth sailing – but long. The tiredness set in on Day 4 – not surprising given there was a big party going on in my bone marrow, what with all the B cells being burst open and destroyed. I actually managed to get about 15 minutes of real sleep on my fancy recliner, no easy feat considering the busyness of patients, nurses, companions, food deliveries etc. My hourly obs were pretty sound, except for the tachycardia blip on Day 1. I had a solid heart rate in the late 70s / early 80s, and a mid-range blood pressure reading. Couldn’t fault the Austin nurses – they were super diligent in their work.

At the end of Day 5, I was free to go. In early April, I see my neurologist and nursing team for a follow up appointment, to see how I’m tracking, and to discuss next steps. But, I can tell you it was such a relief to cut off my hospital bracelet after five days – woo hoo!

It’s now three weeks since my infusion. I’m back at work – albeit at home for a little while to reduce my exposure to external pathogens…

I’m eating lots of good food – it’s super-important to nourish the body while it’s in a healing phase. I became quite addicted to the muesli and yoghurt cups at the Austin Hospital’s cafeteria, so I have been carrying that through to home. Most mornings since, I’ve had homemade Bircher muesli and a pine-berry smoothie for breakfast – yummy… I’m still tired from the treatment – my body has been through a lot! But, and this is key, I’m not fatigued anymore. There is a major difference between feeling tired, and feeling mentally and physically fatigued. This change for me telling, and I’m really

pleased to be able to report upon this. I’m amazed I managed to complete a busy enrolment period in Feburary (the month prior to my treatment) in my role as Course Administrator for National Pilates Training, given my December relapse, fatigue and the hot weather.

My first week at home recovering, I honestly didn’t leave the house. Seriously! I went to the letterbox one day but that was as far as I got. My husband did kinder drop-off and pick-up so that I didn’t have to expose myself to the germs there. My mother took time off work on Thursdays throughout March to take our four-year-old to swimming lessons, and out and about. I stayed at home recovering – napping, watching a bit of trashy TV, sewing (I’m a bit of an embroiderer), and a bit more napping. I did a bit more on my second week of recovery – going to the shops with a medical mask on, for example, but still more down time.

Third week down, and I’m now back at work, though I have a cold. Not surprising given my immune system isn’t firing on full cylinders at this stage. I’m looking forward to starting Pilates again after Easter, to help improve my left leg’s dodgy ambulation. Unfortunately, this hasn’t improved – at this stage – following the Lemtrada treatment, so let’s get Pilates back in to remediate that!