Meet Marie, a determined woman putting goals into action in the Pilates studio! 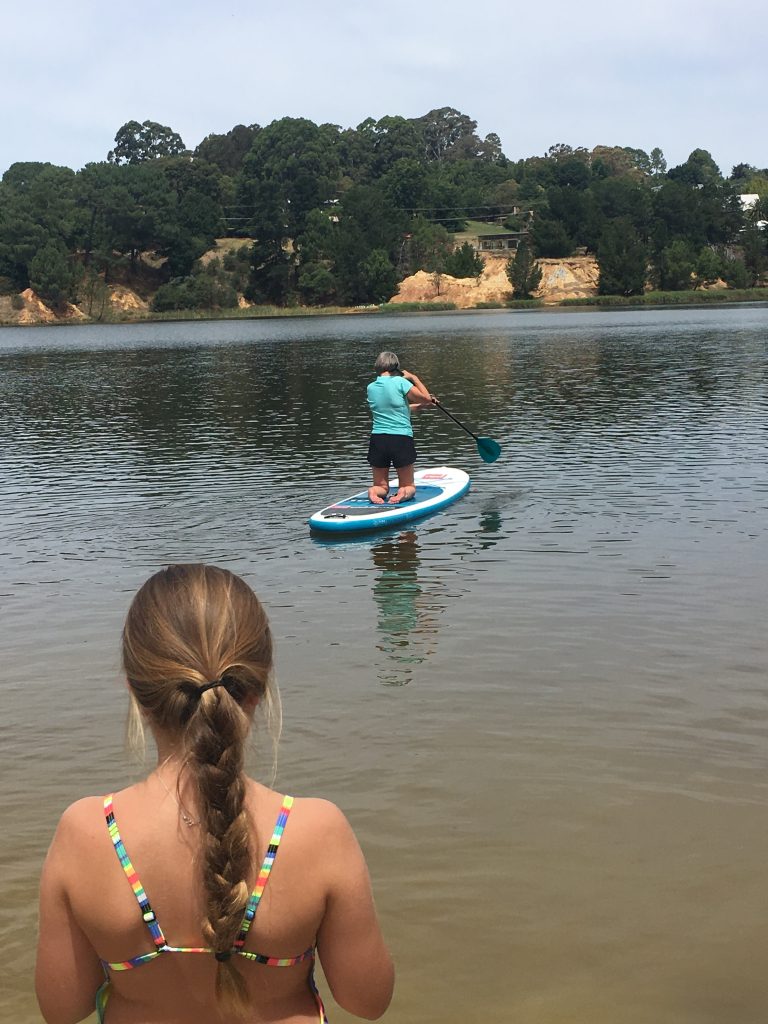 I first met Marie just over 18 months ago and over this time I have gotten to know a determined and resilient woman. When her son bought a stand up paddle board, Marie was determined she too would stand up on Lake Sambell!

Her journey to Pilates began after a serious illness; knowing she was unhappy with the way that she felt post-surgery, a customer suggested Pilates classes. The consistency of her weekly studio Pilates and her home practice made such a difference to her fitness and her body that she has been coming ever since!

It’s a privilege to be a part of Marie’s journey and I sat down to chat to with her about her journey to Pilates and how it helped get her on the board, and well as her future goals.

What brought you to Aligned for Life Pilates?

I had been feeling ill for a long time. And it all came to a head when Wal put me into the car and took me to the Royal Melbourne Hospital where I had an emergency operation and it was cancer…which I thought it was…but didn’t want to admit it. And it’s gone now!

Helen Garner was a customer of ours, and she knew that I’d been ill and she knew I’d had an operation and she knew I wasn’t very happy with that. Helen’s niece was running a class for people over 60 which had to do balance and flexibility and that sounded great! And we came to that, then you asked us to partake in the  research program. Which timewise ended up perfectly because when we came for the first lesson I still had a colostomy bag – which I was very very keen to get reversed. In between the first lesson and the research start I had the bag removed. And timewise it worked out in exactly the three months when I could do something again. And then we had the 8 lessons and we enjoyed them so much and it made such a difference to our fitness that we kept going…and we’re still here! And we intend to keep going. 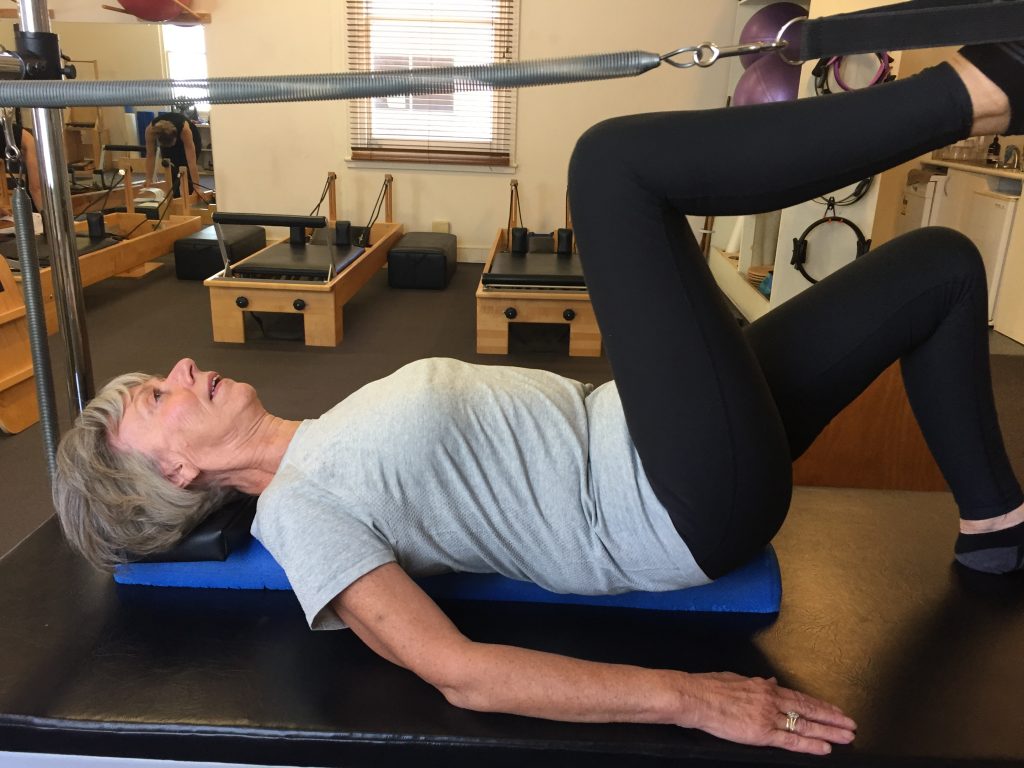 How had Pilates made a difference?

Pilates has made a difference because a) I don’t like not being well b) I wanted to show my granddaughter that people get sick but they get better as well. They don’t necessarily stay sick. In-between the two operations I started walking a lot, trying to get myself as fit as I could possibly be before I had the second operation so I could get over it quicker. Which has worked out! Pilates came along and I think now I’m probably fitter than I have been for a long long time.

As I said before I’d been sick for a while, then I was taken to hospital and I had the major operation resulting in quite a cut and a colostomy bag. When you have things like that you work out strategies of how to cope with things and using my arms to sit down and get up was one of the things I did. After the second operation, and before when I had the colostomy bag, I had a lot of back ache because your body is slightly out of alignment. Even when the bag was removed I  still had alignment problems, and I developed alignment strategies to cope with it and keep moving. If I hadn’t come to Pilates and you hadn’t told me to do these things I would never have realized and I’d still be doing that now! The bad points would have become the way I live my life. I might have been able to walk around the block but I wouldn’t have been able to do it the way I can do it now. The first time I came and you told me to sit down and I put my hands out I plopped down and used my hands to get up; then you said to do it without my hands and I just plopped down and couldn’t get up. And now I don’t sit down using my hands anymore. That bad strategy has gone!

What are some of your favourite exercises?

I like the weights – I’m very fond of the weights. I like anything that opens up the chest. During the operation I had a collapsed lung and I had a bit of trouble breathing, anything that involves deep breathing I just think is really good for me. I love the leg work as well because I want to be able to walk a lot, ride my bike and do things. 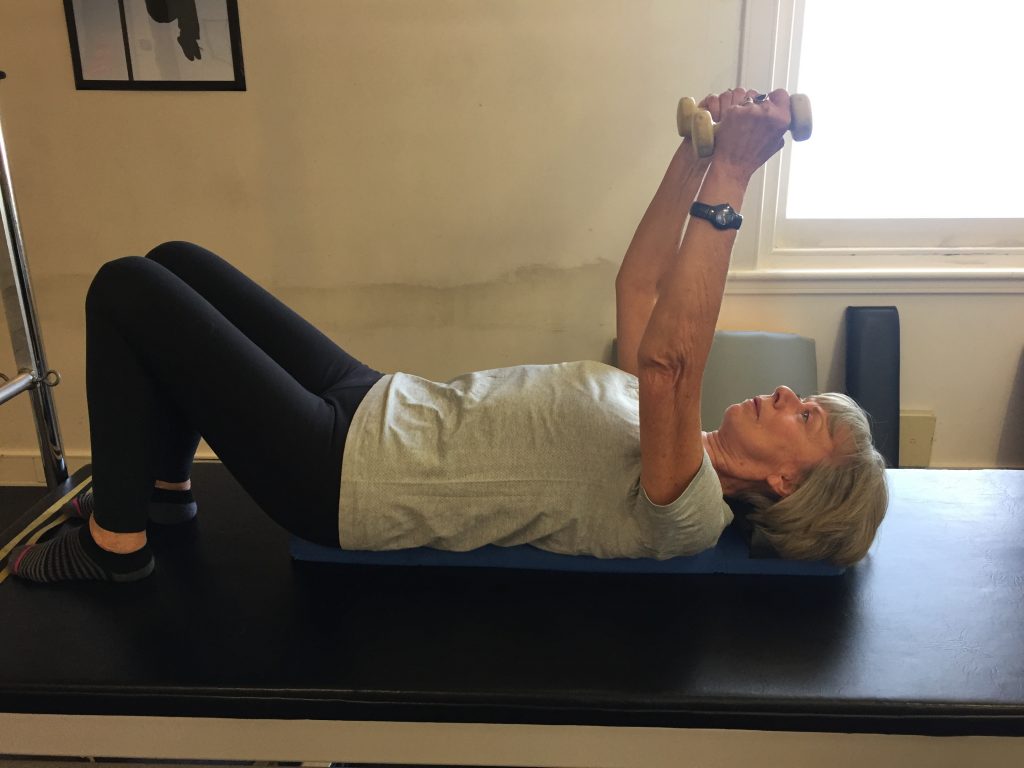 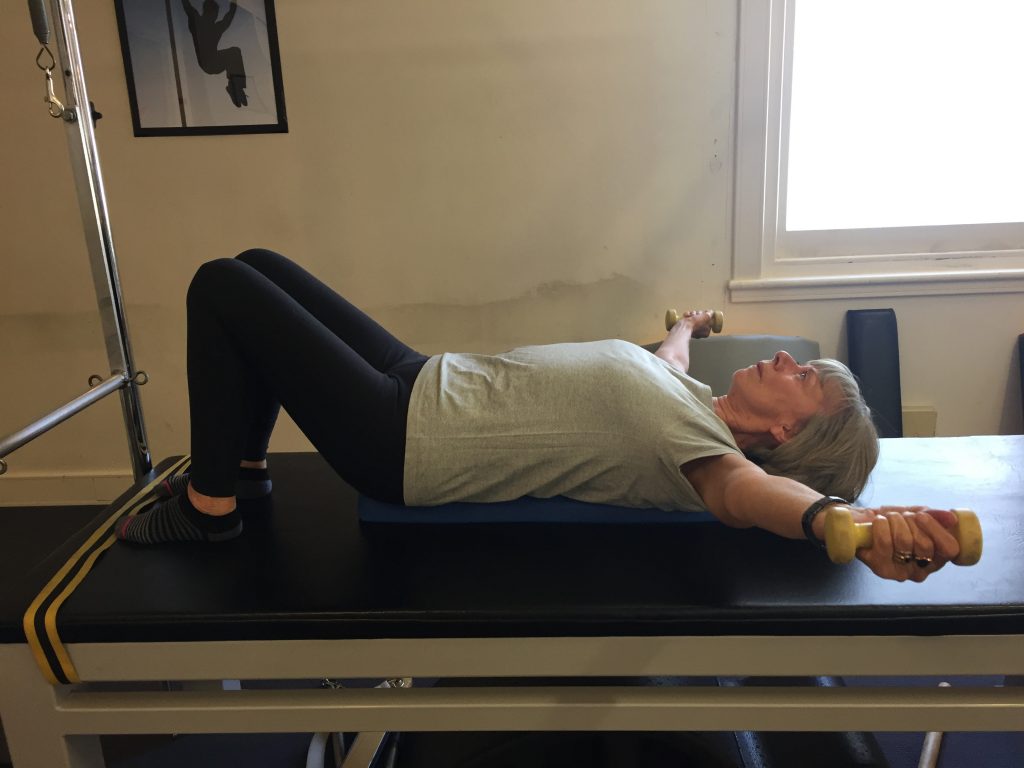 Tell us about your goal?

Paul and Ava bought a paddle board and I’ve always loved water sports of any description – I’m a very keen swimmer, I did a lot of swimming for a long time. I really really wanted to do this – and I really really didn’t want to fall off! Pilates helped with the core strength because I am certain that if I hadn’t done Pilates I wouldn’t have had the balance –  I would have been swimming along Lake Sambell. Which is very cold actually! But it didn’t happen I stayed on – it was just terrific. I felt really proud of myself.

How did Pilates help you to achieve this goal?

Scootering helped me get ready for the stand-up paddle board! (The scooter isn’t one of her favourites! – LK) I wouldn’t have gotten up on the paddleboard if it wasn’t for Pilates.

Paul said to me to kneel on the board first and then stand up and I did think “was that going to work?” and it did! Without Pilates it wouldn’t have worked, because my legs were a lot stronger, my core strength was there, it all worked together and made it happen.

What is your next goal?

Well at the moment I’m trying to get as fit as I possibly can because in September I’m going to Amsterdam by myself for 2 weeks. I’ll have to do a lot of walking and bike riding, so there you are –  got to get the legs going!